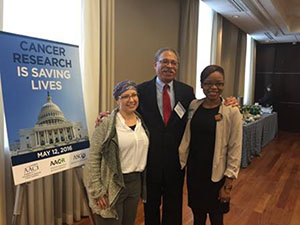 Lawmakers hear from professionals every day on Capitol Hill about the need to increase funding for cancer research, but hearing from cancer advocates and survivors themselves is what makes the need a reality.

To that end, the American Association for Cancer Research invited three cancer advocates from the AACR Scientist↔Survivor Program (SSP) to a Hill Day on May 12, hosted by the AACR, the Association of American Cancer Institutes (AACI), and the American Society of Clinical Oncology (ASCO). This annual advocacy event helps build congressional support for federal research supported by the National Institutes of Health (NIH) and the National Cancer Institute (NCI).

SSP participants Jameisha (Meisha) Brown of Houston, Texas, William (Billy) Foster of Gary, Indiana, and Lori Marx-Rubiner of Encino, California, joined nearly 80 cancer researchers, physician-scientists, and cancer center directors in thanking their members of Congress for demonstrating a renewed commitment to research and funding for the NIH and NCI in fiscal year (FY) 2016 and urging lawmakers to continue this momentum into FY 2017 by providing a $2.4 billion increase for the NIH during the upcoming appropriations process. These advocates shared their deeply personal and powerful cancer experiences and, most importantly, how they have directly benefited from the lifesaving research taking place at the NIH and NCI.

We asked them to share their stories and Hill Day experiences:

I find it humbling to approach Capitol Hill as an advocate, standing in the halls of government representing more than 1,658,000 Americans living with cancer (in 2015) and the half million Americans who will die. I shared the story of my 3-year-old when I was first diagnosed and his belief that it was behind us, that it then reared its head 10 years later (one month before his bar mitzvah), and that while there is a chance I won’t die of metastatic breast cancer, I will most assuredly die with it. Between now and then, I explained, I pray to see my son graduate college, get married, allow me to hold a grandchild, and to continue my advocacy work.

The goal of our meetings was to impress upon our elected leaders the critical nature of continued, even expanded, research. In addition to meetings with Senators Dianne Feinstein (D-CA) and Barbara Boxer (D-CA), we met with House Majority Leader Kevin McCarthy (R-CA), my congressman Brad Sherman (D-CA) and other congressional members from my state of California. Our team included me, two medical oncologists, two cancer center representatives, and one researcher. Between us we told a full story of life with cancer—lives that depend on new and better treatments, the struggle of oncologists getting access to meds and treating patients who are running out of options, and scientists who are walking away from research careers, having a very slim chance that their grants will be funded and they can begin the long road to their own labs. Even as we consider the Vice President’s “Cancer Moonshot” we are losing ground against meaningful progress unless we make up the funds cut over the past decade and demand research keeps pace with inflation. We carried a message of optimism in the face of the many darker years before, but we all live on hope.

While the day was utterly exhausting, especially just two weeks out of chemo, it was equally exhilarating. I can’t wait to be there next year.


On May 12, 2016, I participated in the AACR-AACI-ASCO Hill Day in Washington, D.C., as a member of the AACR SSP. I visited several representatives, including my congressman Pete Visclosky (D-IN) and Senators Joe Donnelly (D-IN) and Dan Coats (R-IN) from my home state of Indiana to thank them for providing a $2 billion increase in funding for the NIH in 2016 and to ask for predictable, robust, and sustainable increases in the coming years.

The participation of cancer survivors added a human touch to these meetings by giving members of Congress the opportunity to meet cancer patients who have benefited from federal funding. For cancer survivors like me, this is very personal. I was first diagnosed with kidney cancer in 1996. In 2007, doctors found metastases of that cancer to my lungs, liver, and brain. At that time, there were very few medications for kidney cancer. So in 2008, I was offered the opportunity to enter a clinical trial and my cancer was kept stable until 2013 when the trial ended. Fortunately, through research, there were medications developed while I was on the clinical trial and I am currently taking one of those medications.

Cancer research is a must and in my case, it has saved my life. I am pleased to say that our Hill Day meetings went well and it is my hope that we accomplished our goal.

Those who are active in communicating science, such as scientists, journalists, and advocates, have major roles to play in ensuring that decision makers who influence health, science, and public policy understand what we know, what we do not know (or may not be cognizant of), and the context of the gaps between what we know and what might be deduced.

Armed with this revelation, I went to Capitol Hill as a cancer advocate, a longtime beneficiary of clinical research, and a young scientist. My first objective was to thank our members of Congress for their bipartisan support during FY 2016 omnibus bill that allocated over $2 billion to the NIH. My second objective was to encourage our congressional leaders to continue to provide substantial, sustainable, and predictable increases in biomedical research funding through the NIH in FY 2017, ultimately keeping pace with inflation.

Thirdly, I stressed the importance of supporting Vice President Biden’s National Cancer Moonshot Initiative that demonstrates promise in cancer control through prevention, early detection, drug discovery, and improved health outcomes. Cancer does not discriminate, thus making supporting cancer research a bipartisan endeavor. Lastly, I strived to convince our leaders that without this continued support of biomedical research, our nation’s desire of achieving a generation free of disparities in health and eventually attaining health equity will be a dream deferred.

I was reassured when I learned during meetings that several of our leaders (e.g., Sen. John Cornyn (R-TX); Rep. John Culberson (R-TX)) are presently devoted to our mission of advancing medical and scientific research. I am immensely grateful for the invitation to participate in the AACR-AACI-ASCO 2016 May Hill Day and continue to work tirelessly to help advance cancer research to ultimately end cancer for all.