Men’s Breast Cancer and The Empowered One Percent 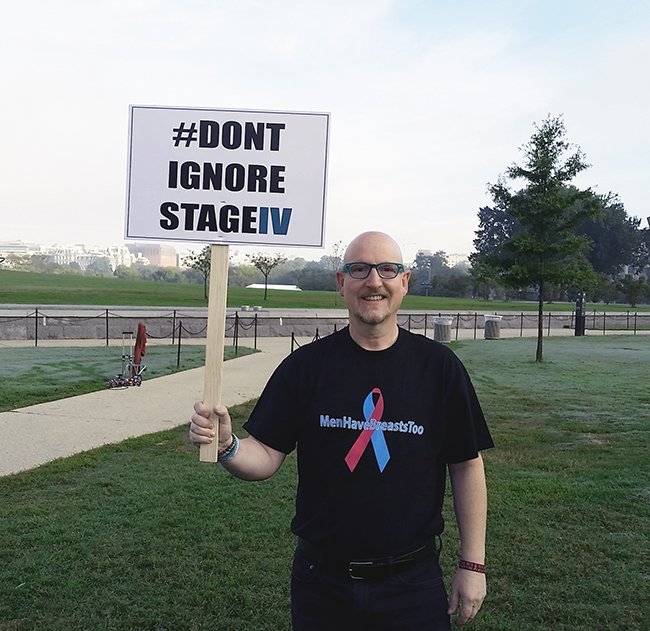 In 2010, there was nary a word written, much less spoken, about men’s breast cancer. No local support groups, no specified days of awareness, no literature on websites, and no conversations amongst friends. So when Bronx native Michael Singer received his diagnosis and subsequent mastectomy, he felt like a freak.

“I told my wife not to tell anyone,” Singer recalls. “I thought there must be something wrong with me and I spent over a year in the closet, so to speak.” About a year after his surgery, he saw a Katie Couric special about men’s breast cancer featuring Richard Roundtree, the actor from Shaft. Singer was transfixed listening to this “cool, crime fighting action dude” speaking about his own breast cancer experience. The report encouraged viewers to contact The Male Breast Cancer Coalition for more information. Singer obliged and was subsequently invited by the organization to participate in a NYC event, which began his lifelong mission to advocate for other men with breast cancer. “I knew I had to get out there and talk about it,” says Singer. “Nobody should go through this alone or feel like a freak the way I did.”

Since then, Singer has spoken at hundreds of events and symposiums, on social media, radio and TV shows, and on government panels. He’s been interviewed for newspapers and magazines, participated in trainings and peer reviews, has been flown across the country for numerous organizations, and sat amongst doctors and scientists evaluating research. Every time he speaks about men’s breast cancer and shares his story, he feels a heavy burden lifting off his shoulders; his secret is out.

What are the facts?

What are some of the risk factors?

What are ways I can lower my risk?

What kind of treatments are available for men’s breast cancer?

In addition to these current standard treatments, clinical trials and research studies are also available to cancer patients in the hopes of obtaining information on ways to help improve current treatments, or discover new ones. Patients who participate in the studies can help improve the way cancer patients in the future receive treatments. These clinical trials can help scientists develop ideas and open doors to new discoveries. The FDA now requires breast cancer research to include men, or to justify why they are not adding men to the studies. “Men just want to be included at the table,” states Singer.

What needs to change?

Where can I find support?

According to a study in the American Journal of Men’s Health, male patients with breast cancer experience psychosocial burdens such as emasculation because of the feminization of the disease. But as male breast cancer gains publicity, more resources have become available, and accordingly, there is more support. Most breast cancer organizations that targeted solely women, now include information for men.

Some inclusive support networks are:

Maintaining a positive attitude, staying active, cultivating a healthy lifestyle, and living each day to the fullest can not only increase the chance for survival, but make the process a little bit easier. In this advanced age of medical care, there is continued hope for new therapies, drugs, and research and access to treatments. Plus, the information and support for men is growing strong. Singer encourages other men to have a good outlook and praises the medical and advocacy communities. “The passion of the people who are trying to find a cure, or do their little piece for breast cancer research, is just amazing. We’ve come a long way since I’ve been diagnosed. I’d love to see breast cancer turn into the genderless disease.”