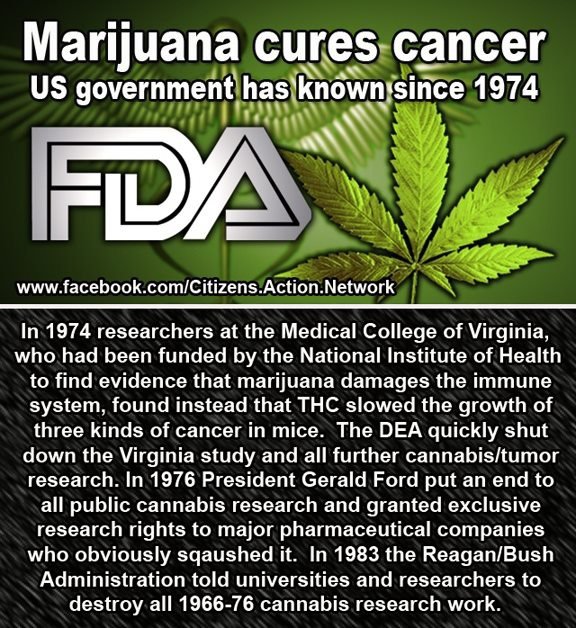 Apparently the left hand of this government doesn’t know what the right hand is doing, or more likely doesn’t want to know. With the easy prey of grabbing marijuana users in most states and locking them up in prisons for cheap labor while destroying families, there’s little motivation to curb that racket by dropping marijuana out of its DEA Schedule 1 Controlled Substance rating.

its budgetary funding and the FDA prefers rubber stamp approving pharmaceutical drugs that are far more dangerous than marijuana and far less effective. The FDA has to oblige their corporate clients to keep their licensure payments from Big Pharma rolling in.

The unpublicized studies that prove cannabis’s medical merits are referenced within the NCI (National Cancer Institute). Though they are pre-utical drugs to enhance chemo or suppress some of chemotherapy’s terrible side effects, there are many, many actual case histories of curing cancers with cannabis.

Of course those are dismissed as anecdotal and not paid any attention by government agencies and the mainstream media. People who are cured by cannabis doesn’t satisfy medical “science”. It has to have a chance to disprove it and carry on with business as usual.

Nevertheless, the following list is excerpted directly from one of the NCI Question and Answer pages about cannabis:

THEIR REPORT ON CANNABIS ANTITUMOR ACTIVITY

–A study in mice showed that cannabinoids may protect against inflammation of the colon and may have potential in reducing the risk of colon cancer, and possibly in its treatment.

–Many animal studies have shown that delta-9-THC and other cannabinoids stimulate appetite and can increase food intake.

–Cannabinoid receptors (molecules that bind cannabinoids) have been studied in the brain, spinal cord, and nerve endings throughout the body to understand their roles in pain relief.

–Cannabinoids have been studied for anti-inflammatory effects that may play a role in pain relief.

End of excerpt from NCI, the “government’s primary cancer research agency”. Paradoxically, another government agency that’s supposed to protect us, the FDA, has recently approved the most dangerous painkiller Oxycontin for 11 year old children. Oxycontin is synthetic heroine, very addictive.

Then there are the synthetic speed drugs like Ritalin that are approved for children under five years of age. Both of them mask symptoms while ruining health.

But of course, those drugs are not Schedule I. They all have “accepted” medical merit, approved by the FDA and prescribed by MDs, the official drug pushers. Evidently the studies listed by the NCI don’t indicate medical merit, but less effective, side-effect-laden synthetic derivatives of cannabis that Big Pharma creates are FDA approved – Ka-ching!
And of course, also ignored are the several animal and human trials conducted on cannabis for various diseases, including cancer, in Spain and Israel. You can go to this PubMed site and do a search for cannabis or marijuana and find several favorable cannabis studies.

Where’s the mainstream media with all this? Honoring their cash flow from Big Pharma’s advertising vast budget with silence, I suspect.

Related Cannabis CBD Oil about to Replace Chemotherapy? | Is Monsanto About to Unleash GMO Marijuana? | Moroccan Connections
About The Author

Paul Fassa is a contributing staff writer for REALfarmacy.com. His pet peeves are the Medical Mafia’s control over health and the food industry and government regulatory agencies’ corruption. Paul’s valiant contributions to the health movement and global paradigm shift are well received. Visit his blog by following this link and follow him on Twitter here.
Found @ Stillness in the Storm